I really like Jamie Oliver recipes. I think they’re fairly quick and easy, utilise readily available ingredients (none of that fancy schmancy “couverture chocolate”), and they pack a punch in terms of flavour.

Jamie’s copped a bit of flack for his 30 minute cookbook. The main complaints are that (1) the meals don’t actually take 30 minutes to prepare (they really don’t), and (2) unlike most cookbooks where each individual recipe is laid out in a step by step format, the recipes in Jamie’s 30 minute cookbook are designed to feel as though he is right there in the kitchen with you telling you what to do next. This means paragraphs instead of point form. And no preparation because you’ll be chopping, sautéing, then chopping again, blending, more sautéing, more chopping, and putting stuff in the oven in quick succession as you work through 3-5 recipes all at the same time. Which I actually really like because that’s exactly the multi-tasking kind of cook I am.

So I’ve decided to time and review some of Jamie’s meals, and for those who hate paragraphs, I’ll try and convert some of the recipes into a more typical recipe format as well. I decided to begin with this meal, which can be found on page 166 of the book. The original recipe is meant to serve 4 but I had a party of 5 for lunch, so the quantities presented are mostly roughly 25% more than Jamie’s quantities.

SMOKY FISH CORN CHOWDER (serves 5-6, I had leftovers)
Ingredients:
5 rashers shortcut bacon
4 spring onions (Jamie’s recipe said “a small bunch, but what does that mean?”)
300g red skinned potatoes (I used 2 potatoes and they were just over 300g)
5 corn on the cob
375g skin off, pin-boned, smoked cod + another 120g piece of “smoked South African white fish”, whatever that meant, for good measure (the recipe called for smoked haddock, which I couldn’t find, so I bought whatever smoked white fish I could find)
3 bay leaves (recipe says fresh but I only had dry)
3 sprigs of fresh thyme
1.25L chicken stock
200ml cream
250g peeled cooked prawns
Bread rolls to serve

Method:
1. Finely slice bacon and fry with “a good lug” (that’s Jamie for you) of olive oil in a non-stick soup pot until golden.
2. While bacon is frying, finely slice spring onions and add to pot. Stir.
3. Wash potatoes, chop into 2cm chunks, add to pot and stir.
4. Put a large clean tea towel on a board, hold a corn cob upright and run a knife gently down all the way to the base and all the way around. Discard the core, then repeat with the remaining corn cobs. Tip the kernels directly from the tea towel into the pot. This step is in bold because it’s very important that if you get nothing else out of this post today, you should try this next time you’re de-kernelling corn. Trust Jamie to come up with a nice quick solution for what is usually a pretty messy job.

My de-kernelled corn, entirely within the boundaries of my tea towel. No picking up stray corn kernels from around the chopping board. No rogue kernels rolling off the board as I move them from bench top to stove top and into pot. Genius!
5. Add smoked fish to pot (whole) with the bay leaves and leaves from the sprigs of thyme. Cover with chicken stock, lid on, cook for 12 minutes.

Step-by-step guide to give you an idea of the quantity of bacon, spring onions, potatoes, corn and fish
6. After 12 minutes, stir the chowder and put the lid back on.
7. After roughly another 5-10 minutes (see why multi-tasking is so great? Who wants to stand by the stove and wait for the food to cook?), add the cream and prawns. Stir well. Put the lid back on and turn the heat to low until you’re ready to serve (this was roughly another 5-10 minutes).

8. Just before serving, take pot off heat. Season to taste with salt and pepper then use a ladle or similar to partially mash some of the fish and potatoes, leaving the rest chunky for texture. Serve with warmed (in a pre-heated oven) bread rolls, with truffle butter if desired.

Method:
1. Put the prawns into an ovenproof dish with “a few lugs” of olive oil, the butter, thyme, cayenne pepper and cinnamon, and a pinch of salt and pepper.
2. Crush in the unpeeled cloves of garlic.
3. Deseed the chilli, slice and add to dish with 1/2 lemon. Toss and mix well.
4. Whack on the top shelf under a pre-heated grill for 8-10mins until prawns are dark pink with golden tips.
5. When it’s done, turn off the grill and leave prawns in oven to keep warm. This is also a good time to put in any bread rolls that you’d like to gently warm up.
6. Squeeze the half lemon over the prawns just before serving. 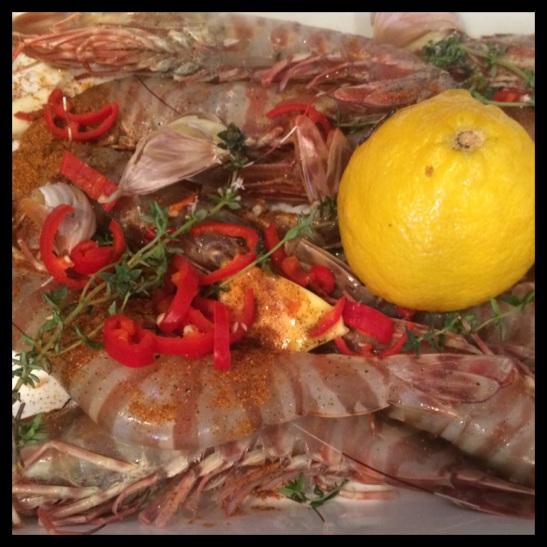 All ready for the grill

OK, I have a confession to make. I take shortcuts when I can and when I think the quality and flavour will not be compromised. I mean, who doesn’t? So, if you take my advice with the salad packs, the method is as follows…

Method:
1. Open salad packs and dump into bowl.
2. Put everything else into Thermomix or food processor and whiz until combined, then season to taste with salt and pepper.
3. Pour dressing into a small jug, drizzle over salad and toss just before serving.

BERRY SLUSHIE (serves 5)
Ingredients:
4 handfuls ice cubes (recipe said 2 large handfuls and was for 4 people. I didn’t know if I qualified as having large hands and was preparing for 5, so decided on 4 regular sized handfuls)
Leaves of 3 sprigs of fresh mint
50ml tropical cordial (because I didn’t have elderflower, which is just about the fanciest thing that Jamie likes to use)
200g frozen raspberries
1L soda water

Method:
1. Add ice and mint leaves into Thermomix (or food processor) and blitz. I set my TM at speed 9 for about 4-5s. This is where I have to brag. Just look at the photo and tell me that the fine granita texture of the ice, achieved in just a few seconds, does not make you want to rush out there and get yourself a Thermomix!
2. Add cordial, raspberries and about 500ml soda water and whiz again until you get a slush. Again, I gradually increased the speed of my TM to 9 over about 5-10s.
3. Pour mixture into jug and top with remaining soda water. Stir before serving. 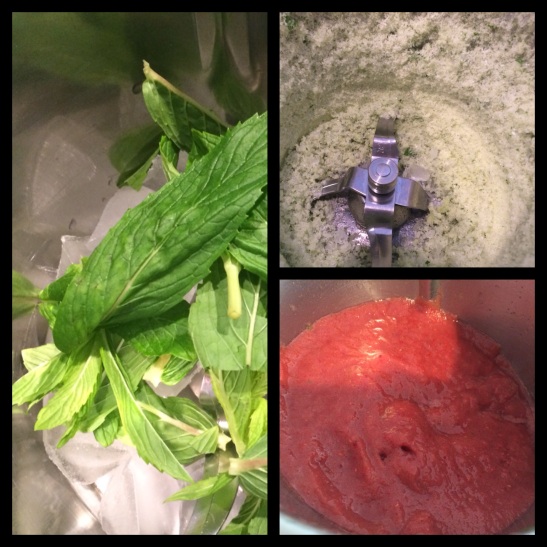 And finally, the moment of truth. How long did all that take? Well, I started at 11.35am and finished at 12.42pm, so all up 67 minutes. I did take a shortcut with the salad, but on the other hand, I kept stopping to wash and dry my hands so I could take photos. I also have to keep reading to see what the next step is, so it’s definitely believable that Jamie, not having to refer to his cookbook, could do this all in 30mins.

As for the flavours? The corn chowder was delicious! Not too creamy, and perfect for a cold and rainy day like today. I would definitely make this again. The prawns were good too, but a tad spicy – maybe less chilli and cayenne pepper next time. The slushie was great to soothe some of the heat from the prawns. It had a light and refreshing flavour, not too sweet.

The only letdown I felt was the rainbow salad. I don’t like strong flavours, and the tarragon was a bit too strong in my opinion. I would probably leave that out next time but add some lemon or lime, as I prefer slightly tangier salad dressings.

This recipe did not come with a dessert (some of them do), so I finished off with Heston Blumenthal‘s hidden orange Christmas pudding. I know, it’s not even Christmas yet. But these were sold out by early December last year, so I thought I’d better get in quick this time.

It was super easy. Just microwave, stand, microwave again on a lower setting, stand again, invert onto a plate, serve. The hardest part was working out how to switch my microwave onto a lower setting. Because I’ve never done it before. And who keeps manuals? But we worked it out eventually.

When it was ready, the pudding was released upon inversion with a very satisfying plop. It did not cut very well due to the abundance of fruits and nuts. But it was tasty, so whatever.

I have another confession to make. I actually don’t really like fruit cake/Christmas pudding. But I just really wanted to taste this because, you know, it’s Heston! So, from someone who’s not big on these things, I actually did enjoy the pudding. It was rich and moist, fruity, nutty and spice-y…I suppose everything a Christmas pudding should be. But what I appreciated were the chewy pops of nuts adding a bit of texture, the fact that the spice flavour was not over the top, and most of all, the “hidden” orange at the heart of the pudding. I mean, sure, the fact that the box states “hidden orange Christmas pudding” across the top kinda detracts somewhat from that element of surprise, but it’s still visually rather appealing when you cut into it and unearth the golden core, which is all gooey, sticky, sweet and tangy goodness. Then again, I personally really like citrus flavours and textural foods. I served the pudding with some mango ice-cream that I had prepared earlier.

Have you tried any of Jamie Oliver’s 30 minute meals? Which one should I try next?