What happens on a walking tour of Berlin

The wealth of information that is available over the internet can be a double edged sword. Whilst it certainly makes research a heck of a lot more convenient in that just about everything you could possibly need to know about anything is just a click or two away, sometimes the over abundance of data can be overwhelming, particularly for the more obsessive amongst us who want to make sure we’re getting the best deal possible. This is how one may feel when deliberating over which company to go on a walking tour of Berlin with.

I’ve been to Berlin twice now, and both times participated in a walking tour. The first time, I went with Berlin Walks, mainly because I’m a huge fan of the London Walks and hoped that the Berlin version would hit the same mark. I can’t remember how much their Discover Berlin tour cost just over 10 years ago, but the going rate is now €12. This time around, I decided to give one of the free tours a go. We settled on Brewer’s Berlin Express Tour as the meeting point was in a convenient location to where we were staying, the time suited us, and because at 3.5 hours duration, this tour was the longest and therefore, we figured, the most comprehensive. Before I cut to my verdict, let me give you a brief run down on what happened on our Brewer’s tour.

The Brewer’s tour meets at 1pm outside Bandy Brooks ice-cream store at the corner of Friedrichstrasse and Georgenstrasse, just steps away from the exit of the Friedrichstrasse station. However, the tour doesn’t properly commence until around 1.30pm, as the person who meets you outside the ice-cream store is really only a gopher responsible for steering you towards the real meeting point at the front steps of the Altes Museum, which is situated in the Museumsinsel, where you could easily spend an entire (rainy) day enjoying works of art from all over the world and spanning the centuries. The Museumsinsel is home to one of the most famous museums in the world for ancient art and architecture, the Pergamon Museum, which houses such big ticket items (literally!) as the eponymous Pergamon Altar and Ishtar Gate of Babylon. Other highlights include the Ägyptisches Museum (Egyptian works) and the Alte Nationalgalerie (19th century paintings and sculptures). The Berlin Dom also stands rather impressively in the Museumsinsel. While your guide rounds up the group and goes over the formalities of the tour, there is ample time to snap a photo or two of this ornate Baroque style cathedral, the largest in Berlin, with the fountain before it. This had been built for the Pergamon Museum but ended up having to be left outside as it was too large to fit into the museum! 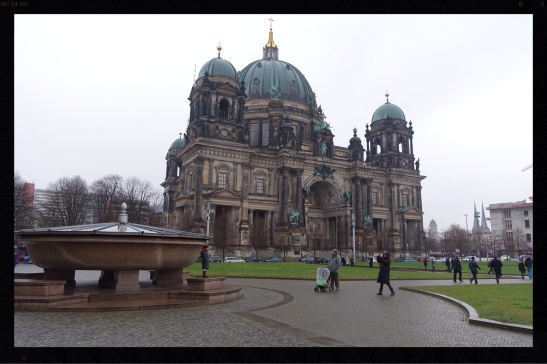 After hearing a bit about various historical events that have taken place in the area, It is only a short walk down the Unter der Linden to Neue Wache, the German war memorial where there is a sculpture of a mother cradling her deceased soldier son. There is an opening in the ceiling over this sculpture, such that after it has rained, the sculpture appears as though the mother has been shedding tears of mourning.

Further down the Unter den Linden is Humboldt University, where the brothers Grimm and Einstein once taught. Across the road is Bebelplatz, notorious for being the site of the Nazi book burning on 10 May 1933. A memorial to this event has been built into the cobblestones in modern times. The Empty Library consists of a thick glass panel that looks into a room bounded on all 4 sides by empty bookshelves. The shelves are able to hold around 20 000 books, roughly the number that were destroyed on that fateful night. Even more poignant is the accompanying plaque bearing a line from Heinrich Heine’s play, Almansor (1821): “Das war ein Vorspiel nur, dort wo man Bücher verbrennt, verbrennt man am Ende auch Menschen.” This is translated into English as, “That was only a prelude; where they burn books, they will in the end also burn people”. 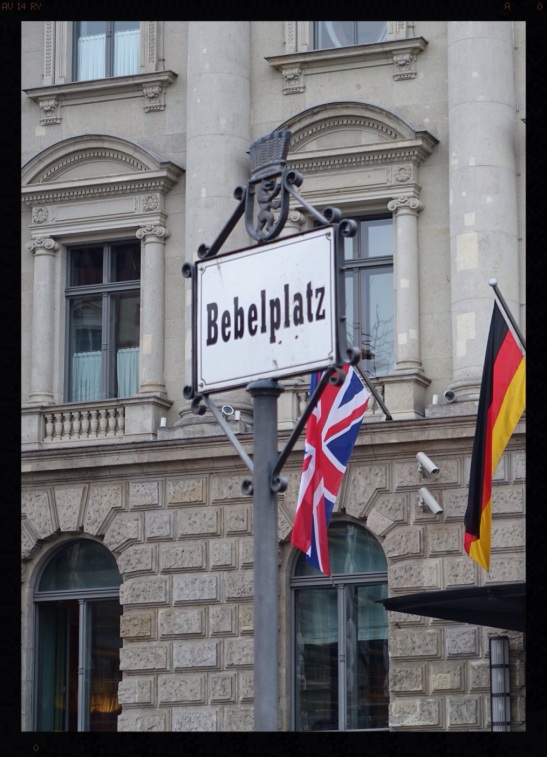 From Bebelplatz, it’s a right turn down Behrenstrasse and an immediate left down Markgrafenstrasse until you see Gendarmenmarkt to your right, flanked by the German and French Cathedrals, and home to one of the most beautiful Christmas markets in Berlin. 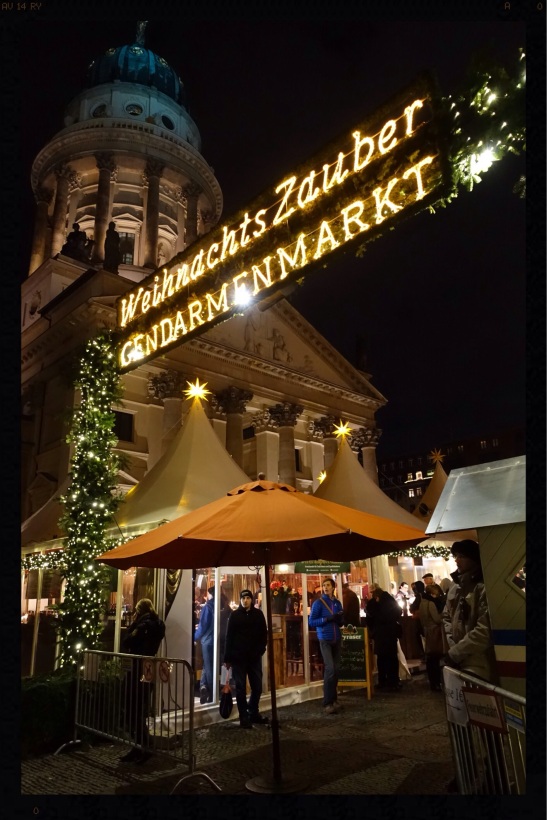 Just across the road from the Gendarmenmarkt, you’ll find one of several Ampelmann Galleries. These cute little guys grace many of the traffic lights in Berlin and make great souvenirs in just about every form imaginable, from your usual postcards, stickers, pins and magnets, to wine stoppers, ice cube trays, bags and diaries.

Keep heading south until you get to Checkpoint Charlie, keeping your eyes on the ground for metal plaques known as Stolpersteine or “stumbling blocks”, which have been set into the ground to commemorate those who suffered under Nazi rule in prisons and concentration camps. As we were moving quite quickly on our tour, I was unable to take any photos, but it didn’t feel quite right anyway.

At Checkpoint Charlie, there is a free open air exhibit about post World War 2 Berlin. We were given a 15-20 minute rest stop/coffee break, during which I could have explored the exhibit but instead chose to use my time more wisely by sneaking some photos of old postcards, as well as these “guards” who allegedly also make a living by taking their uniforms off when the sun goes down. I’ll let you be the judge of that! 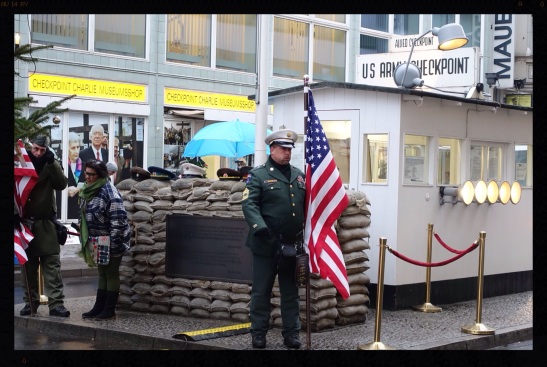 From Checkpoint Charlie, head west towards the Topography of Terror, where prisoners were once interrogated and tortured. Not only is there a free exhibition here, you can also see a rather sorry remnant of the Berlin Wall. This portion of the Berlin Wall was easily accessible when I first visited Berlin just over 10 years ago, but is now protected from souvenir scavengers by a gate. 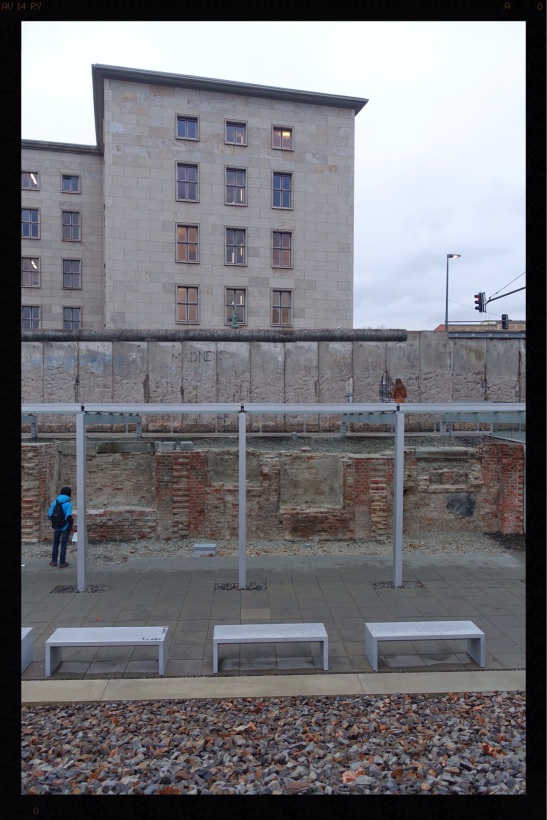 Heading back north, you will walk past what once was Hitler’s Bunker, now just a car park, in order to get to the eerie but strangely beautiful field of unadorned grey stele making up the Holocaust Memorial. It’s worth taking a few minutes to stroll and lose yourself amongst the stones, which vary in size and tend to get progressively taller towards the centre of the memorial. The effect is somewhat claustrophobic and could be overwhelming, but I think this, coupled with the overall simplicity, serves as a poignant memorial to the 6 million Jews murdered between 1933-1945. You can also learn more about the genocide in the free below ground information centre.

Further north along Ebertstrasse, you will eventually come across the famed Brandenburg Gate to your right. 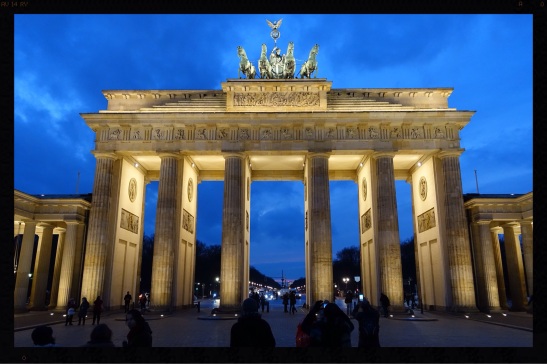 Walk through the gate to get to Pariser Platz. Right across the square and slightly to the right of the Brandenburg Gate is the highly exclusive Hotel Adlon. Recognise the balcony? I wouldn’t be surprised if you did, as this was the site of the infamous Michael Jackson baby dangling incident! Coincidentally (or perhaps not), this was the first and only piece of information I retained from the first Berlin walking tour I participated in all those years ago, and is now the last piece of information imparted to us on this particular tour. Only time will tell whether or not I remember anything else about Berlin the 2nd time around other than Michael Jackson dangling a baby over the balcony of an especially prestigious hotel.

So, finally, we get to my verdict:
Would I recommend a walking tour of Berlin?
Absolutely! If you have time to spare, I think hearing some of the history about the places that you’re seeing gives a much richer and hence more enjoyable experience. If you’re short of time and want to visit some of the sights covered by the tour instead of just whizzing along, I suppose you could just as easily use the route I’ve just outlined as a guide, stopping in at each of the sights that you want to visit in more depth. I’ve even included a little map for your convenience. But seriously, I think it’s more fun to go on a walking tour!

Which walking tour company should I go with?
The first walking tour I did years ago started at the Brandenburg Gate instead of the Altes Museum, but included all of the same sights as the Brewer’s tour. So my advice here is, it doesn’t really matter which one you pick! Since they’re probably all very similar, why not choose the tour that is most convenient for you in terms of timing and meeting place? Also, since there’s no difference between a paid tour and a free one (at least between the 2 that I’ve been on), I’d go with the free tour, especially in the winter time. In the summer, I’d expect the free tours could be more crowded than the paid ones, but the group that I was with just before Christmas was only about a dozen strong including my 3 friends and I. Please remember that, although the tour is free, tips are gratefully accepted (and should be given, in my opinion), but at least you get to decide for yourself what the tour is worth at the end.

And because I’ve already done the research and my blog is all about sharing what I’ve learned through my travels, here is a list of the walking tour companies that I looked into prior to my trip:
Brewer’s Berlin express tour: FREE, 3.5 hours, meets outside Bandy Brooks ice-cream store at the corner of Freidrichstrasse and Georgenstrasse at 1pm daily except Christmas Day and New Year’s Day

Sandeman’s walking tour: FREE, 2.5 hours, meets at the Brandenburg Gate in front of Starbucks at 11am and 2pm daily

Berlin Walks: €12, 3.5-4 hours, meets outside the Wiehenstephaner Restaurant opposite the Hackescher Markt S-Bahn station at Neue Promenade 5 at 10.30am daily, additional 2pm tour from April-end October

Insider tour: €12, 4 hours, meets outside AM to PM Restaurant opposite the Hackescher Markt S-Bahn station at 10.30am daily, additional 2pm tour from April-end October

What do I need to do to join a walking tour?
Absolutely nothing! That’s what’s so great about these. Just rock up to the meeting place about 5-10 minutes before the appropriate time. No reservations required. They run rain, hail or shine. Just remember to bring comfortable walking shoes, sunnies/wet weather gear as required, water and some snacks if you think you’ll need the sustenance, and some spare change for the fee or tip.

Ampelmann Gallery
There are 6 stores in Berlin, including:
Gendarmenmarkt – Markgrafenstrasse 37
Unter den Linden 35
For other locations, check here

Have you been on a Berlin walking tour before? Which company did you go with? Was it much the same as the one I did? Would you recommend it? Do you love the Ampelmann as much as I do?

2 comments on “What happens on a walking tour of Berlin”