As it turns out, it was probably just as well my flight to Japan was delayed for a day, forcing me to forego my trip to Nikko and instead spend an extra day in Tokyo. I chose Asakusa as my base for 1 night before heading to my conference in Tsukuba because I knew the Keisei line would take me straight from Narita Airport to Asakusa, and that I could catch the Tsukuba Express the following day from Asakusa. Furthermore, I’ll be based more centrally in Shinjuku next week after the conference, so I thought it was a good opportunity for me to “tick off” some of the sights in Asakusa and neighbouring Ueno over the day and a half before catching my next train. These are little things that come instinctively once you’ve been travelling around the world for some time, making your travel experience that little bit easier and more enjoyable.

Nevertheless, I couldn’t help feeling a bit like this:﻿ 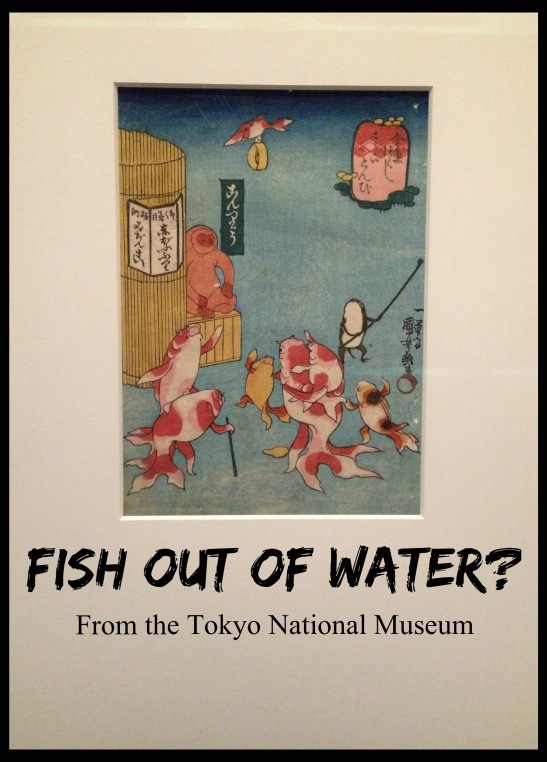 ﻿I don’t know whether it’s because I didn’t get much sleep on the flight between 10.20pm-6am and literally hit the ground running as my room wasn’t ready to check in until 3pm, but I’ve never felt so lost and confused in a new city. At one point, feet aching after walking non-stop from 8am-3pm(ish), I even felt close to tears when I couldn’t work out how to get to the metro in Ueno. Tip #1: Like in every other city, the rail is above ground and metro below! I blame it on lack of sleep and tiredness.

Luckily, Tokyo-ites seem to be the friendliest and most helpful people I have ever come across in any big city! Tip #2: A smile, a bow, and a “Sumimasen, _____ wa doko desu ka?” (“Excuse me, where is _____?”) will get you far. Sure, I don’t remember enough of my high school Japanese to actually understand the responses blurted back to me, but put on your best confused look and they’ll soon realise that’s the only Japanese phrase you know. Which isn’t a problem as I think they appreciated the effort and would then use a combination of hand gestures and what little English they know to help me get to my destination. A few even walked with me. Just as well I remembered that “Isshoni” means “together”, ie “come with me” in that context.

Anyway, the theme for the day was clearly food. I started off at Kappabashi-dori, otherwise known as Kitchen Town, for this street is lined by stores selling all sorts of pastry making equipment, ceramics, chopsticks, and (what I was really looking for) fake food. ﻿

Tip #3: Be sure to withdraw as much money as you feel comfortable carrying on your person while you’re still at the airport. I totally underestimated how much shopping I would do, and just as my friends had warned me, they don’t like credit cards here and ATMs are hard to come by once you leave the airport.

For dinner, I decided to flip through my Top 10 Tokyo guide. I was immediately drawn to Sometaro, as I love Japanese pancakes, known as okonomiyaki. I also noticed this restaurant was marked on the maps I’d photocopied from my Lonely Planet Japan book. Double recommendation? Surely this place wouldn’t disappoint!

The restaurant, like many in Japan it seems, is situated rather inconspicuously along an otherwise unexciting lane, and therefore quite hard to find especially in the dark.

﻿In the photo, it’s the little Japanese style building on the right.

Tip #4: Ever wondered what the 3 numbers mean in a Japanese address? I worked out pretty quickly that the first number refers to the area (chome), the 2nd number is the block it’s in, and the final number is the building. I found this sign at the end of the street, alerting me to the fact that I was close to the restaurant, which is situated in 2-2-2 Nishi-Asakusa. ﻿ 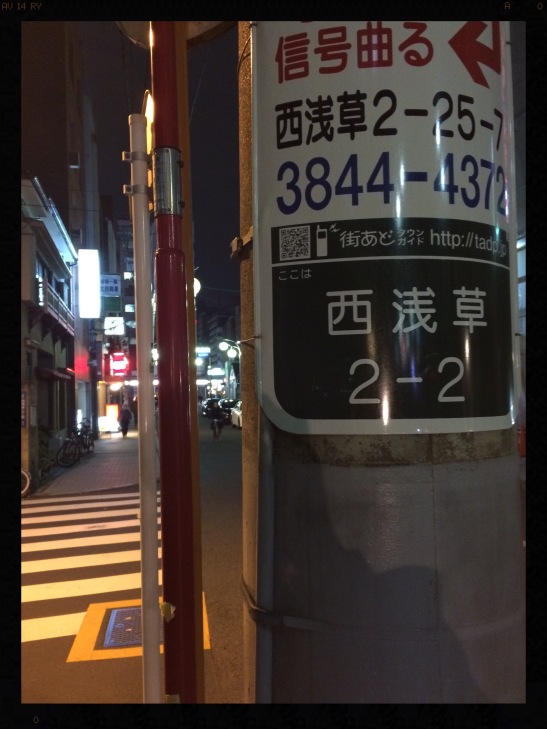 ﻿The sign tells me that I’m in front of Block 2 in region 2 of Nishi-Asakusa.

Tip #5: Most of the signs are situated not on signboards along the street, but instead on the walls of the end buildings of each block. Like this one, across the road from the restaurant, letting me know that if I crossed the street, I would have walked too far and into Block 1 of region 2 of Asakusa. ﻿ 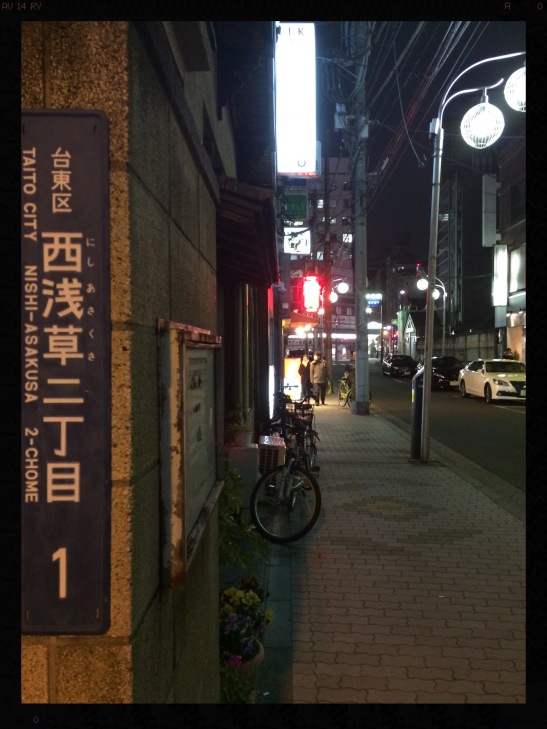 Despite its unassuming exterior, the restaurant is actually fairly spacious inside. It’s Japanese style dining, which means shoes off and sitting on cushions on the floor. ﻿

There’s quite a good selection of different types of okonomiyaki at what I consider to be pretty good prices. ﻿ 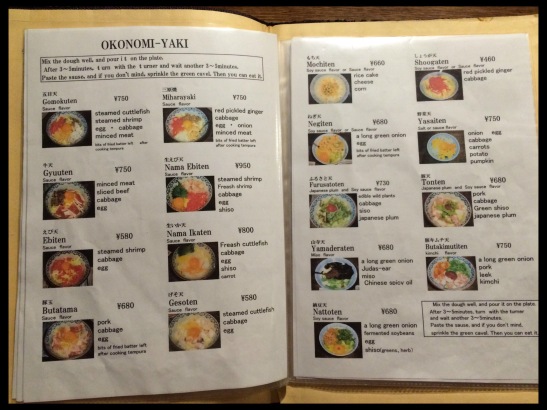 However, I decided to try the osomeyaki instead as I wanted to photograph one of the wait staff cooking the pancake for me. ﻿

2. Sprinkle over the toppings.

3. Cook the noodles separately on the hot plate, then transfer onto the pancake.

4. Crack an egg in the middle of the noodles.

5. Pour over the remaining 1/2 batter, then cook around 6 minutes both sides.

Not only did I feel incredibly spoilt having someone cook my meal right in front of me, the smells were amazing and got me salivating immediately! But not so fast! My waitress returned and cut my pancake into quarters. On 1 quarter, she demonstrated how I should paint on a sticky salty sweet sauce, then squirt over some mayonnaise, and finally top with dried seaweed sprinkles. ﻿

The waitress then gestured for me to do the same with the remaining quarters. Mine didn’t look as neat but tasted just as delicious. ﻿

You all know by now that I love contrasts in my food, and the osomeyaki ticked all the right boxes. The slightly charred surface encased firm cuttlefish pieces, perfectly cooked shrimp that still had a slight crunch (nothing worse than soggy shrimp!), fresh shredded cabbage, springy noodles and a runny egg, all of which were tied together by the sticky sweet sauce and creamy mayonnaise.

The ankomaki dessert intrigued me. ﻿

﻿ So, once again, I found my eyes to be bigger than my stomach. ﻿ 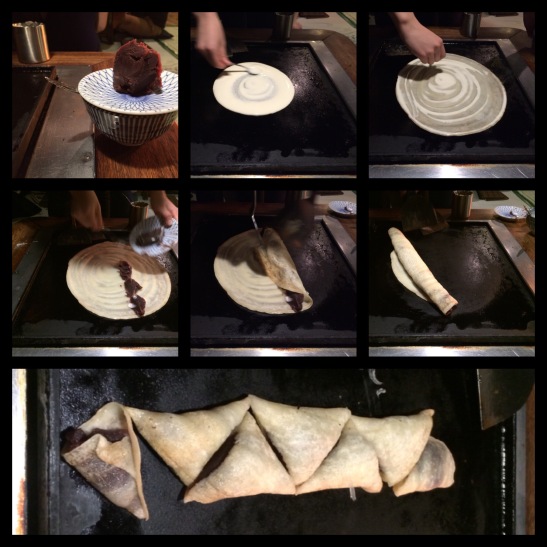 ﻿I’m glad I tried it, though. This was again made by my waitress in front of me. It’s essentially a crepe filled with red bean jam, and it was very good. The crepe itself is made paper thin, as you can see. I’m glad the waitress had cut the crepe up into bite size triangles, as I was already starting to feel full halfway through the 3rd quarter segment of my osomeyaki. So I called over to the group of 4 German backpackers at the next table, and asked if they’d like to try a piece each, confident that no backpacker would ever say no to free food! I’m not really sure if they actually liked the red bean filling or not, but most Germans I’ve met and known are pretty adventurous when it comes to food and experiences, so I figured it was a good opportunity for them to try something they’d otherwise probably never order.

You can expect typical Japanese hospitality here, from the cries of “irrashaimase” as you slide open the door, to the bows and repeated “arigatoo gozaimashita”s as you leave. You do have to get your own water though, but this is very easy with a water station clearly set in the middle of the dining area.

Cozy traditional Japanese, exactly what I was looking for as a tourist! There also seemed to be several groups of locals dining there, which is always a good sign, I think.

Closest metros Tawaramachi (Ginza line, exit 3) or Asakusa (Asakusa line, I’m quite sure I went up the escalator of either exit A2 or A3, then walked down Kappabashi Hondori, keeping my eyes pealed for signs on buildings telling me the block and building numbers. It was a bit hard to find, but do persevere!

I’m so glad I didn’t give up looking! This was a fantastic first meal in Japan for me, not just in terms of flavours, but also as a cultural experience in a Japanese setting with that famous Japanese hospitality. Highly recommended!

4 comments on “OkoNOMiyaki in Asakusa”