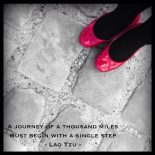 My last trip to Japan was centred around flowers. I’ve already told you about my awesome day trip to Ashikaga Flower Park for the wisteria, here’s another option you might like to add to your itinerary.

What is this pink moss?
Known by its scientific name as phlox and in Japanese as shibazakura, there are some 800 000 stalks in verdant fields about 3km south of Lake Motosuko in the Fuji Five Lakes area. These bloom in spring each year, transforming the landscape into a pink, purple and white patchwork carpet that serves to highlight the beauty of Mt Fuji in the background. 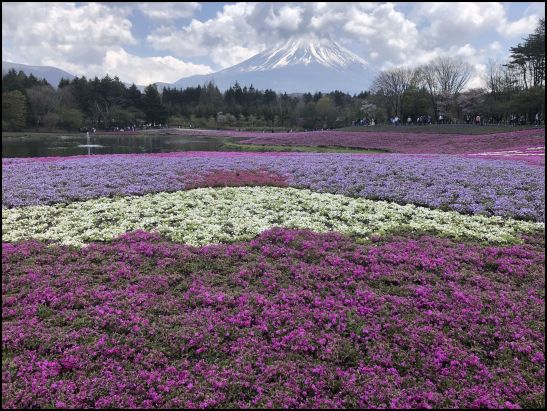 When can I see the pink moss?
The season is from mid April to early June, with peak blooms generally in the first 3 weeks of May. This year, the Shibazakura Festival goes from 18 April to 31 May 2020. 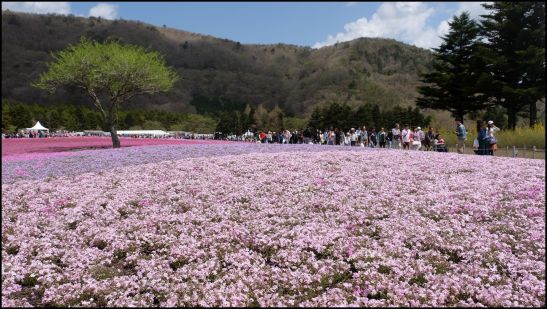 Hint: If you have a few days to spare, I suggest being a bit flexible so you can check the weather and look out the window before you go. It would be a shame to go all that way, only to have Mt Fuji hiding behind clouds.

How do I get to the Shibazakura Festival?
The most direct way is to take the Fuji Kyuko bus which operates a direct service from Shinjuku that takes about 2.5 hours.

However, I opted to take the train to Kawaguchiko Station instead and from there switch to the Shibazakura Liner, partly because I was staying at Ueno, mainly because I had prepurchased a JR Tokyo Wide Pass, and also because I had failed to check my travel dates and had arrived in Tokyo smack bang during Golden Week. I knew the roads would be madness, so was hoping that travelling at least partially by train would avoid the traffic jams and get me there a bit quicker. To be honest, I’m not really sure it made that much of a difference, but more on that later.

Hint: Avoid travelling to and around japan during Golden Week!

What is this JR Tokyo Wide Pass?
JR sells a range of rail passes, many of which are not actually worthwhile unless you’re making at least one long distance trip. The JR Tokyo Wide Pass is one exception that’s great value for those staying within Tokyo and looking to do a few day trips. This pass is available only to non-Japanese passport holders and costs just ¥10 180, giving access to nearly all JR lines within the Kanto region over 3 consecutive days (Tokaido, Hayabusa and Komachi shinkansens are excluded). This includes the Narita Express and Tokyo Monorail lines serving Narita and Haneda Airports, as well as lines to many popular tourist destinations such as the Fuji 5 Lakes area, Yokohama, Kamakura and Nikko. Considering the journey from Tokyo to Nikko by shinkansen already costs ¥5480 one way, you can easily see how this pass can very quickly more than pay for itself. You can buy the pass from the JR ticket office upon arrival at Narita Airport, you’ll just need to show your passport.

Hint: I recommend planning all of the day trips you wish to take before arriving in Tokyo, then checking the cost of each day of train travel on the hyperdia website. Although you can maintain some flexibility by not having to prebook tickets, aim to go on your 3 most expensive day trips in terms of train travel over 3 consecutive days, activating your pass on day 1.

What time do I need to wake up?
Brace yourself, because this is going to be a loooong day with a super early start and fairly late finish.

These are my suggested train times from Ueno:
5.10-5.15am Ueno-Kanda by JR Yamanote Outer Loop Line; 5.20-6.33am Kanda-Takao by JR Chuo Line for Takao; 6.42-7.19am Takao-Otsuki by JR Chuo Line for Matsumoto; 7.26-8.21am Otsuki-Kawaguchiko by Fujikyu Railway, which is also covered by the JR Tokyo Wide Pass but not by other JR passes

Once you’ve arrived at Kawaguchiko Station, just follow the crowds to the Shibazakura Liner, which departs roughly every half hour from 7.50am-3pm, with buses returning to the station at similar intervals from 8.30am-5pm. Please remember to buy your ticket from an attendant before you queue for the bus. A few people were caught out and had to queue up again for the next bus! The return bus fare including admission (normally ¥600 for admission alone) to the festival site is ¥2000 for adults and ¥1000 for kids. The journey normally takes about 40 minutes, but get this – on the perfectly beautifully clear blue day I went during Golden Week, our time on the road blew right out to around 2 hours there and just under 2 hours back to the station.

Glad to finally get here!

What is there to do at the Shibazakura Festival?
To be honest, the Shibazakura Festival site is pretty small. Essentially, you walk around the lake, savouring the views of Mt Fuji contrasting against the pink fields in the foreground. At around the mid point of the park, there’s a viewing platform with a constant queue, but it’s worth going up to get a better view of the meticulous moss arrangements as well as mini Mt Fuji. 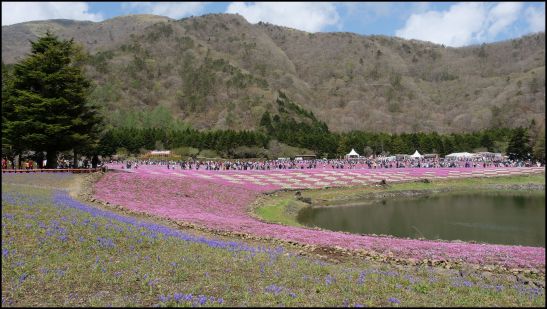 As is typical of Japanese festival sites, you’ll find food stalls towards the end of the park. You purchase food tickets from the vending machines, then go to your stalls of choice to exchange said tickets for food. I didn’t find the culinary options as innovative as at Ashikaga Flower Park, so settled on a nikuman (pork bun), mochi ice-cream and a mantou bun in the shape of Mt Fuji that was filled with red bean paste. They were all tasty enough, but not knock your socks off awesome. 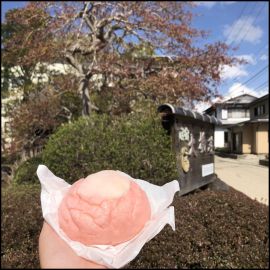 How long will I need to spend at the Shibazakura Festival?
I spent a fair amount of time queueing up for the viewing platform, and again to buy food, yet despite that, ended up spending only about 1.5 hours there. Maybe I was already a bit disgruntled by the long bus ride, compounded by the crowds once I got there, but I found this to be more than enough time for me to enjoy the views and take some photos.

What are the opening times for the Shibazakura Festival?
The site is open from 8am-5pm, so you can see there is no chance of getting there at or close to opening time as a day trip from Tokyo. Even if the Shibazakura Liner had taken its usual 40 minutes to get from Kawaguchiko Station to the festival site, I would have arrived just after 9am. Nevertheless, the crowds would probably have been more manageable at that time compared to when I ended up arriving at around 10.30am. 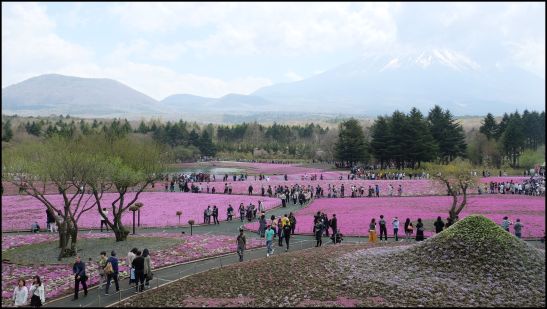 Hint: For a more streamlined stress-free experience, please avoid Golden Week! Or better yet, consider an overnight trip to the Fuji 5 Lakes area so that you can turn up bright and early just as the festival site is opening.

So, was it worth it?
You know what? This is actually a no from me. Had I known I would be wasting a total of 4 hours on the shuttle bus to and from the Shibazakura Festival, I would have made much better use of my time by visiting some of the other sights around the Fuji 5 Lakes area.

What else is there to do then?
For that classic view of Mt Fuji behind a 5 storey Japanese style pagoda, take the Fujikyuko Railway to Shimoyoshida Station and walk about 15-20 minutes north to Chureito Pagoda.

For views of Mt Fuji as a backdrop to a cute Alpine style village, take the Red Line sightseeing bus to Orugoruno Mori Bijutsukan station and go to the Music Forest Museum, which is about 4km from Kawaguchiko Station towards the northern end of Kawaguchi Lake (so is potentially also walkable).

For views of Mt Fuji against a tulip field foreground, take the JR Line to Gotemba, and from there a bus to Grinpa Amusement Park, which also has a Sylvanian Village that may appeal to kids. For the shopaholics, there is also outlet shopping at Gotemba.

For more tulips, sunflowers or roses (depending on the season), there’s also Swiss-themed Heidi’s Village.

What’s so special about Oshino Hakkai?
Oshino Hakkai is a small village built around 8 sacred ponds, whose waters originated from Mt Fuji and were used by Mt Fuji worshippers to purify their bodies prior to climbing. For today’s tourists, the village is a charming snapshot of a traditional Japanese village with immaculately preserved thatched roof buildings clustered around mirror-like ponds, with Mt Fuji standing majestically in the background.

Mt Fuji was a bit shy on the day I visited, intermittently peeking out from behind the clouds

The tranquil beauty is epitomised by Hannoki Bayashi Shiryokan, a small open air museum surrounding the largest pond in the village. Although costing only ¥300, this token fee seems to keep out most of the riff-raff and is well worth it to be able to enjoy the views in peace. The museum is open from 9am-5pm.

How do I get to Oshino Hakkai?
The easiest way is to take the Mt Fuji Heritage Loop bus. An all day ticket costs just ¥1050, but bear in mind that this is a limited service, so do check the timetable here, and maybe even print it out before you go. 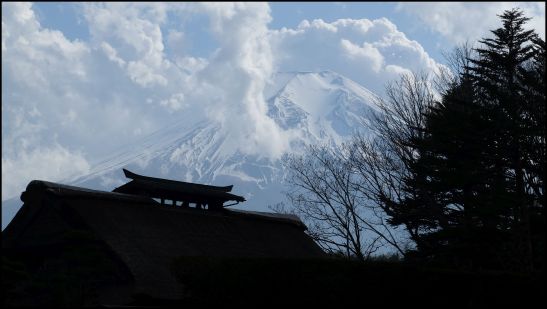 A close up of the elusive Mt Fuji

How long will I need to spend at Oshino Hakkai?
I took the 2pm bus from Kawaguchiko Station which arrived at Oshino Hakkai just after 2.30pm, and the 5.38pm bus back. This gave me around 3 hours to explore, including enjoying some of the more secluded areas, which was just enough for me.

Have you been to the Fuji 5 Lakes area? Did you see the pink moss? Did you think it was worth it? What else should I add to my list for next time I visit Mt Fuji?

Australian Traveller that loves to "Roam" our globe, creator of ENDLESSROAMING.COM sharing the experience through word and photography. Currently residing in my home of Newtown Sydney